The 21st annual Nike Hoop Summit will take place at the Moda Center on Friday, April 13, and the 12-member World Team features many of the world’s leading basketball players 19 years or younger.

The annual game -- which boasts the past eight No. 1 overall NBA draft picks -- pits the World Team against the USA Basketball Junior National Select Team, which is composed of elite, American high school players.

The 12-member World Team for the 2018 Nike Hoop Summit features many of the world’s leading basketball players age 19 years old or younger. The 21stannual Nike Hoop Summit will take place at 7 p.m. (PDT) on Friday, April 13, at the Moda Center in Portland, Oregon.

The annual game pits the World Team against the USA Basketball Junior National Select Team, which is composed of elite, American high school players. This year’s World Team features a high number of international players who have chosen to play high school basketball in the United States. Three Montverde Academy (Fla.) players lead this year’s version of the World Team.

Beyond the Hoop Summit’s prestige, participation in the game is seen as a step towards professional play. As of December 2017, a remarkable 72 former U.S. players and 33 former World Team members were active in the NBA, nearly one-quarter of the entire league, and a total of 203 Hoop Summit alumni have been drafted professionally.

Tickets for the 2018 Nike Hoop Summit are on sale now. Lower bowl seating starts at just $10 and courtside seats are $50 and $75. Applicable service charges apply. Tickets are available through Ticketmaster, the Rose Quarter Box Office or by calling 800-745-3000.

Jaylen Hoard and Charles Bassey are rising stars and examples of the 2018 World Team’s athleticism and length. Hoard, a 6-foot-8 small forward currently playing at Wesleyan Christian Academy in North Carolina hails from France and will attend Wake Forest. Bassey, a 6-foot-10 big man from Nigeria, is one of eight World Team players who has yet to make a decision on where they will play next year. He is ranked No. 3 by ESPN for the 2019 draft class.

An explosive athlete at 6-foot-6, shooting guard Josh Green is known for playing above the rim. A native of Australia, Green moved to the United States in 2014 with his family and currently plays for IMG Academy in Bradenton, Florida.

Kevin Zhang, a native of Shenyang, China, competed for Montverde with Nike Hoop Summit teammates Barrett and Nembhard last season. The 6-foot-8 power forward has been touted for his impressive range and quick first step.

Lithuanian-born Ignas Brazdeikis hails from Canada and is committed to play for the the University of Michigan Wolverines next year. A big wing player at 6-foot-8, Brazdeikis is a dynamic left-handed scorer.

A University of Minnesota signee and native of Nigeria, Daniel Oturu is the top-ranked recruit from the state of Minnesota. Ranked the No. 6 center in his class by ESPN, the 6-foot-10, Otruru excels at protecting the rim. 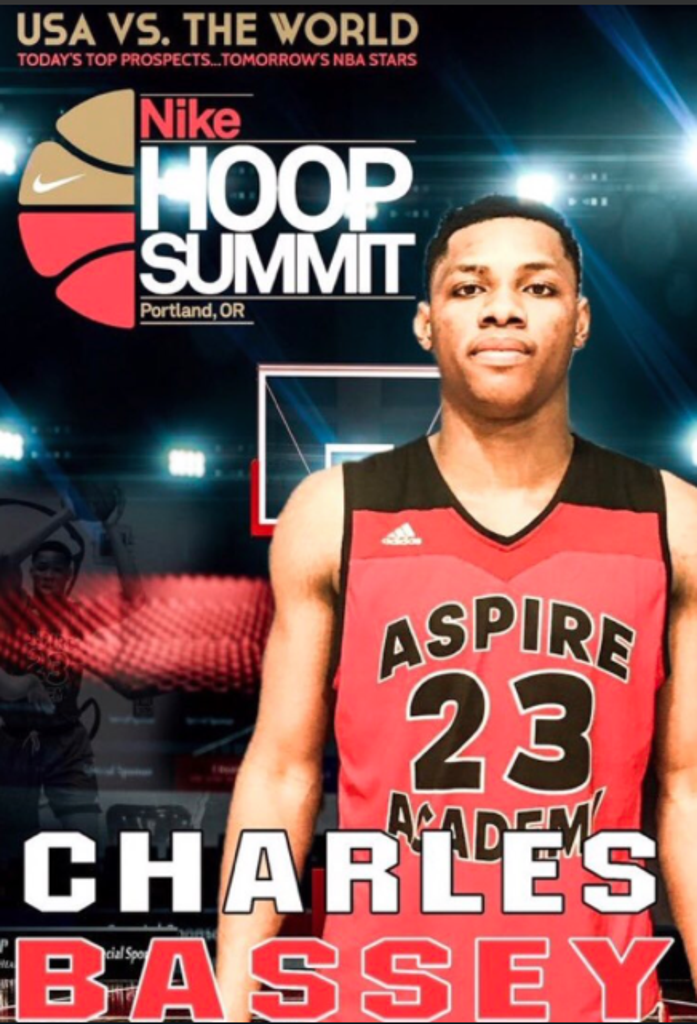 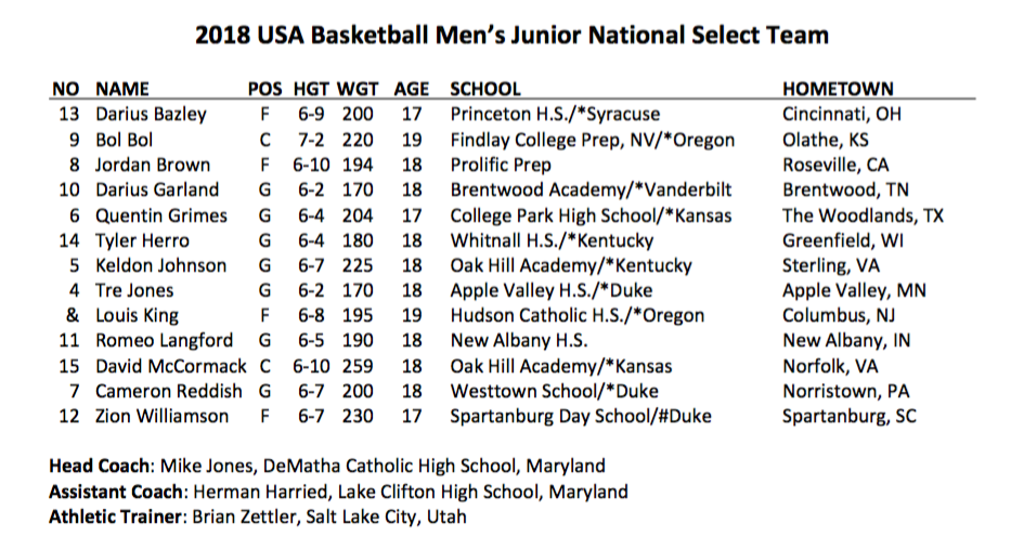 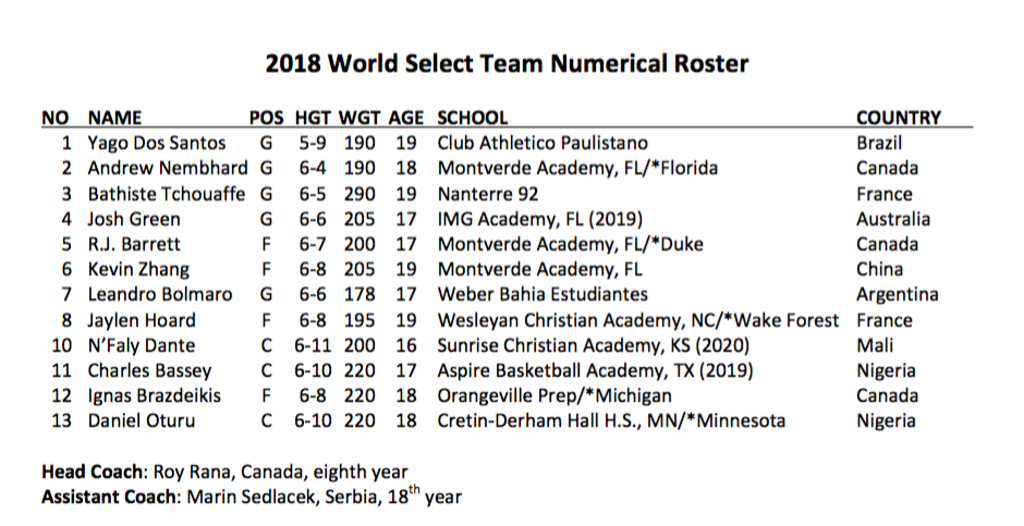 At age 17, Leandro Bolmaro is one of the younger players on the World Team this year. The 6-foot-6 swingman, known for his strong outside shooting, plays for Weber Bahia Estudiantes in Argentina. Earlier this year, Bolmaro was selected to the All-Star team at the Basketball Without Borders Global Camp in Los Angeles.

Bathiste Tchouaffe, a 6-foot-5 wing player from France, has a great shooting touch and is a solid defensive player. As team captain, he led his team to a gold medal finish at the FIBA Europe U18 Championship in 2016.

A 5-foot-9 point guard, Yago Dos Santos hails from Sao Paulo and is considered the top prospect in Brazil. The 19-year-old recently has been starting as point guard for his country’s senior national team.

A native of Mali, N’Faly Dante is the youngest member of the World Team this year. ESPN’s No. 9-ranked member of the 2020 class, Dante is a 6-foot-11 center who currently resides Wichita, Kansas.

The USA Junior National Select Team roster that will play in the 2018 Nike Hoop Summit can be found online.

Tickets for the 2018 Nike Hoop Summit are on sale now. Lower bowl seating starts at just $10 and courtside seats are $50 and $75. Applicable service charges apply. Tickets will be available through Ticketmaster, at the Rose Quarter Box Office or by calling 800-745-3000. 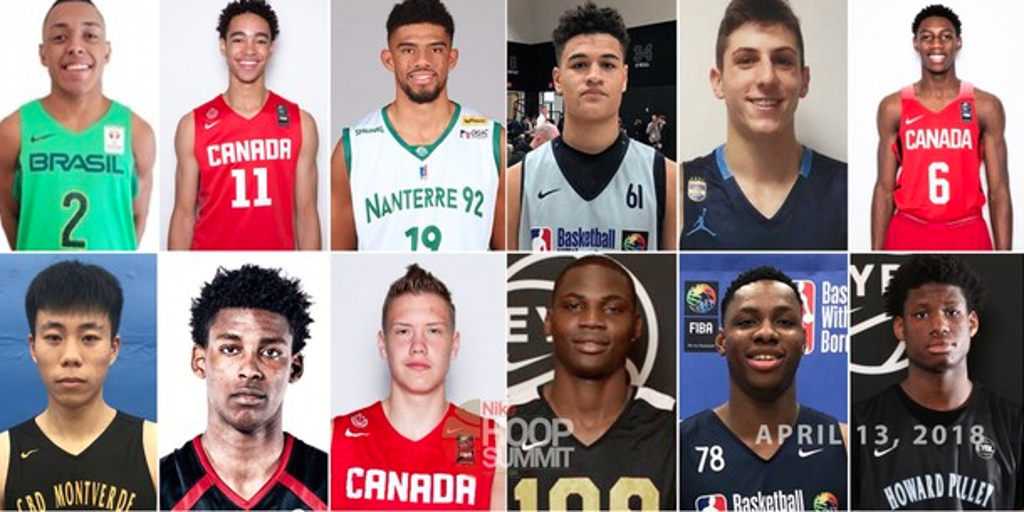