Aspire makes run in the 'World Championships' before falling in finals

After a long, grueling season on The Grind Session, and winning three games in three days, the World Championship Final matchup came down to Aspire Academy (KY) and Victory Rock Prep (FL). Both teams showed a great display of heart in an intense final game, as they gave fans in Owensboro, Kentucky a show.

Aspire Academy got things going from the tip as senior point guard Caleb Fields found five-star junior Charles Bassey cutting to the basket for an alley-oop to open the game. Senior wing Jonathan Dos Anjos immediately responded with a drive to the basket where he finished through contact and drew the foul. The free throw put Victory Rock up 3-2 in the early goings and the game continued to go back and forth midway through the first half. With eight minutes left in the first period of play, Aspire Academy held a 12-10 lead and maintained that lead down the stretch as they found themselves up four with 1:51 remaining. The lead would never grow past that for Aspire Academy and they took a 30-26 advantage into halftime.

A newly inspired Victory Rock Prep team came out firing on all cylinders in the second half and jumped ahead of Aspire Academy early after a three-pointer from senior wing Madut Akec put them up 32-31. After a quick spurt of offense from a committee of Victory Rock players, Mawot Mag hit a three that capped off a 10-4 run that put his team up 42-35 with 8:14 left in the game. Bassey responded with his own three-pointer from NBA range to pull Aspire Academy with four of Victory Rock with just over six minutes to lay.

The Wizards of Aspire Academy continued to chip away at Victory Rock's lead, but the Blue Devils had a response for everything Aspire threw their way. With 1:35 left in the game, Bassey hit another three-pointer that cut the lead to three. On the next trip down he attempted another three-pointer to tie the game, but a miss that went long on the rebound allowed a run out for Victory Rock and an easy basket to extend their lead to five. That would essentially be the icing on the cake for Victory Rock on their way to a 60-54 win and earned them the title of World Champions.

Akec took home MVP honors with a 16 point, 12 rebound, and 4 assist game. Dos Anjos also played a big part in the victory, as he chipped in 15 points and 7 rebounds. Bassey led Aspire Academy with 22 points, 7 rebounds, and 4 blocks, while junior wing De'Sean Allen-Eikens added 11 points in the loss. 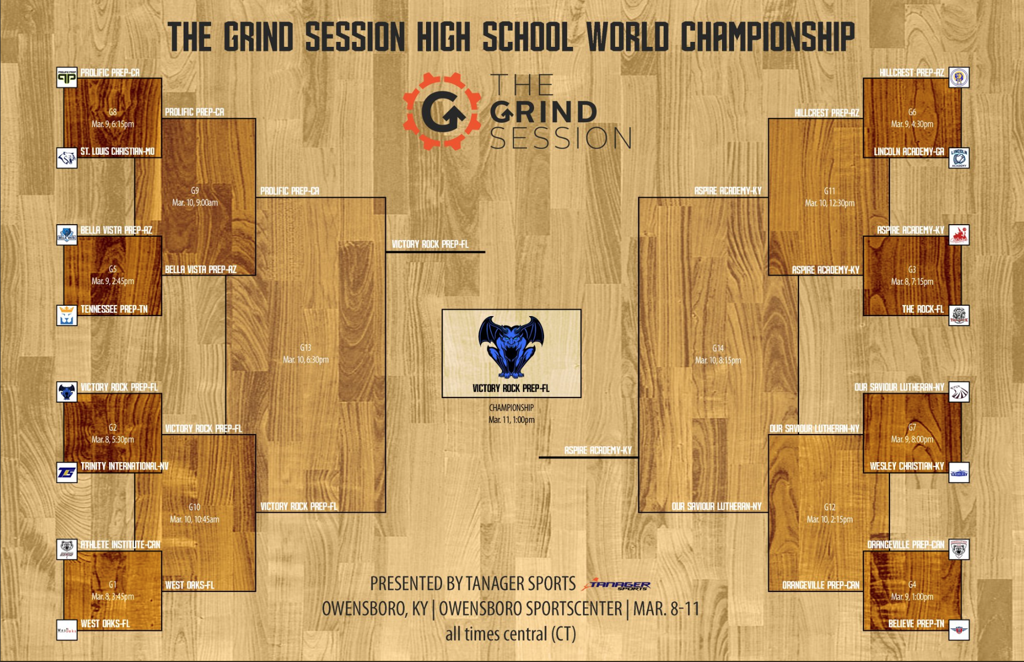 Final bracket of the Grind Session 'World Championships' where Aspire Academy won 3 games before losing in the finals to Victory Rock Prep of Bradenton, Florida