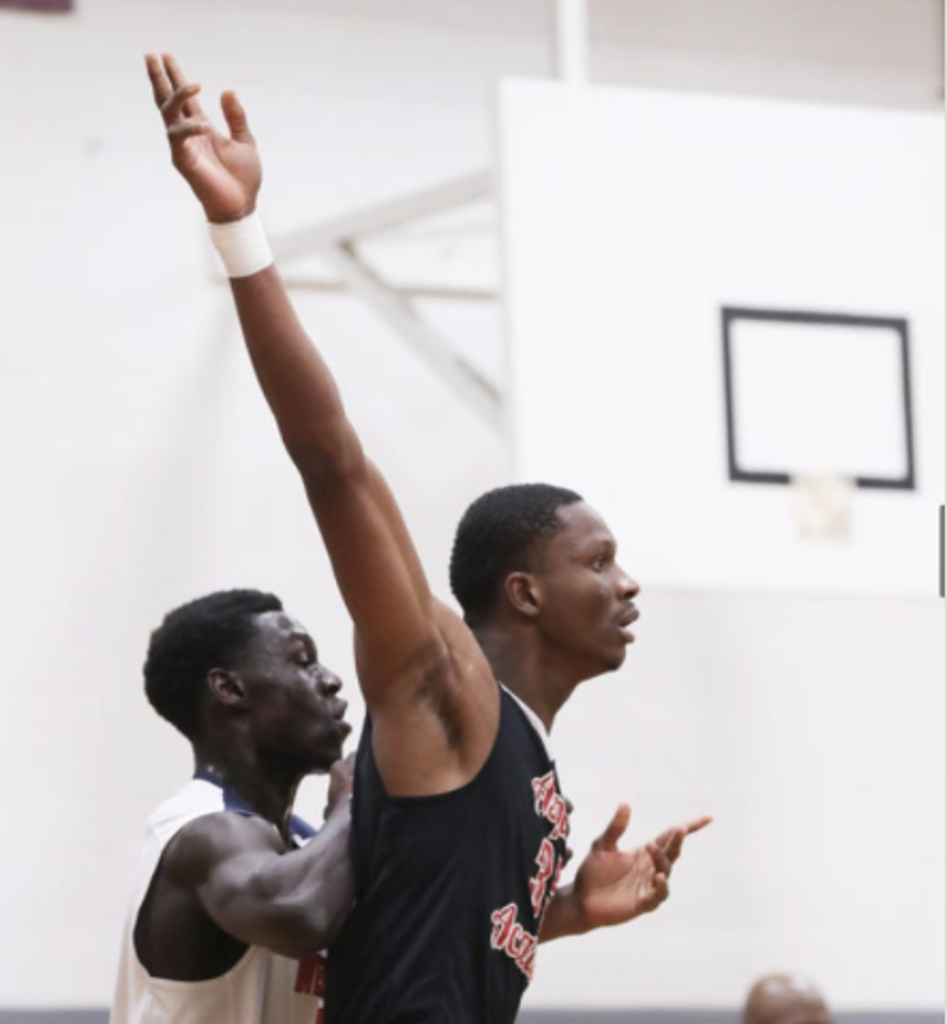 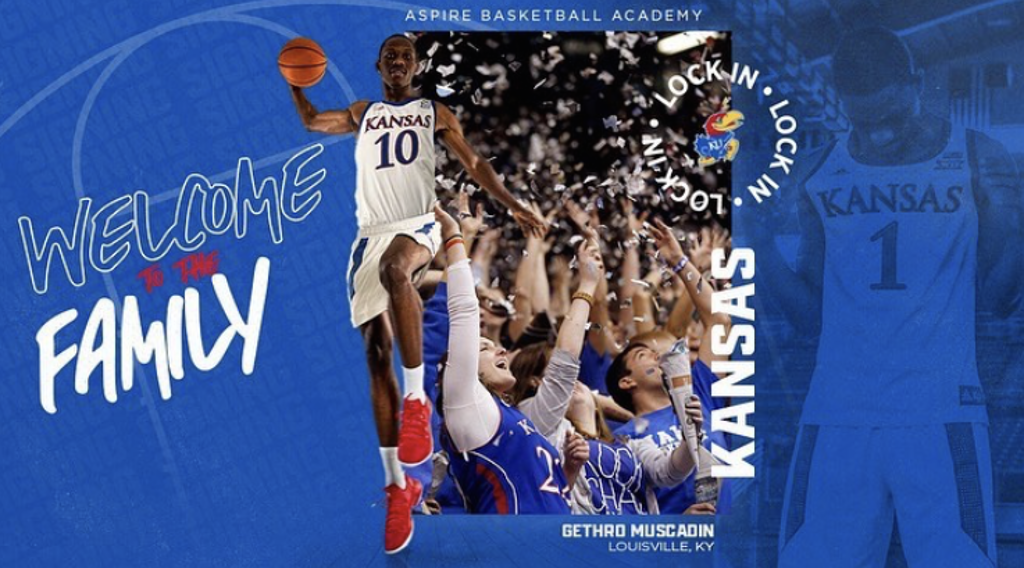 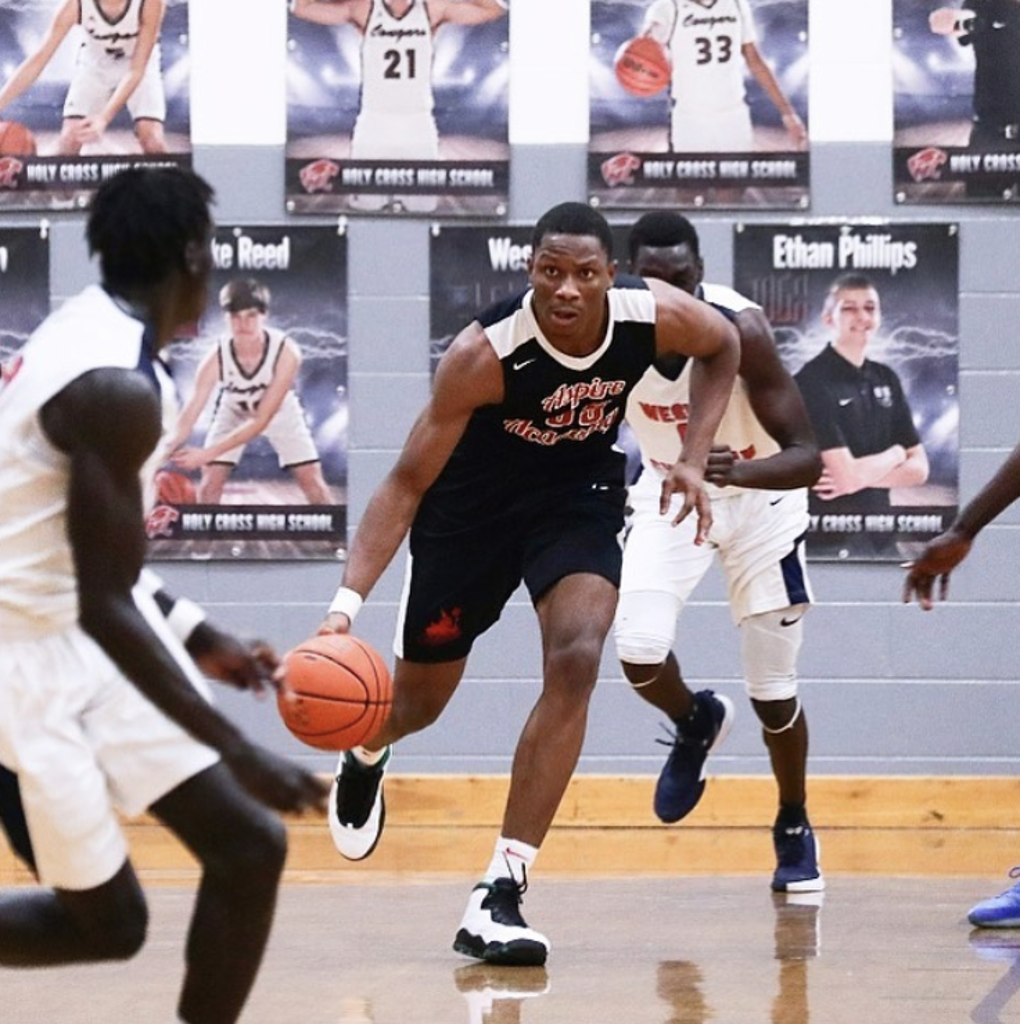 He's a local top-flight recruit headed to Kansas. So why haven't you ever heard of him?

Gethro Muscadin has to ever so slightly duck his head every time he enters and exits a gym. High school gyms and their entrances aren’t quite big enough for the 6-foot-10 forward to comfortably walk through.

People tend to notice his towering height. Kids have asked to take pictures with him, and adults strike up conversations, usually beginning with “Hey, how tall are you?”

He typically responds with “I’m a football player," or "I play lacrosse.”

Despite getting stopped by people in the streets, Muscadin, who signed to play at Kansas in the fall and is ranked the third-best senior prospect in Kentucky by 247sports, is relatively unknown on the local basketball scene.

Perhaps it’s because the 19-year-old plays for Aspire Academy, a basketball-centered college preparatory program with a global roster, instead of a school in the Kentucky High School Athletics Association.

Perhaps it’s because his high school team played in its home gym at Holy Cross just five times this season and travels to play in Minnesota, Illinois, South Carolina, Virginia and other states to compete in a prep-school circuit, The Grind Session. Students from Aspire take classes and live in a dormitory at Holy Cross after the program relocated from DeSales High School last year.

Those who follow Kentucky high school basketball have heard the names of seniors like Bardstown's JJ Traynor (Louisville) and North Oldham's Justin Powell (Auburn), and have followed the career of Marshall County junior Zion Harmon, but Muscadin, a nationally coveted recruit, is barely a blip on the local radar. In a preseason survey conducted by The Courier Journal, coaches were asked to list the top 10 players in their region and the commonwealth. Of the 136 coaches who responded, only one mentioned Muscadin’s name at all.

“I really don’t care to be honest. Let them have (the attention),” Muscadin said. “In my head, I know I’m better than them. That’s all it matters to me.”

"Absolutely, he’s a hidden gem," Kipness said. "Even being a Kansas commit, no one still knows him."

Hailing from Gonaives, Haiti, Muscadin attended a basketball camp in Haiti when he was 15. He only went to the last day of the camp, where he said he was lost most of the time.

“I didn’t know what I was doing,” Muscadin said. “I was just doing what they were telling me to do.”

But a coach from the United States, who later became one of his AAU coaches, noticed Muscadin’s potential and encouraged him to move to the U.S. He left his mother, four brothers and one sister in Haiti and, at age 16, moved to Wichita, Kansas, to attend Life Prep Academy. He said he talks to his mother every day and with his siblings almost as much, but it still took time to adjust to a new life.

“It was hard, man,” he said. “There wasn’t a lot to do there. The hardest thing was language. I didn’t speak English at all. I knew zero English. It took a long time to adapt to it.”

“The food is not the same. It took me a while to get used to,” continued Muscadin, who added that he now enjoys eating at Texas Roadhouse. “Some food, like green beans, I couldn’t eat. I didn’t like it. I still don’t like it.”

Muscadin admitted that he sometimes gets homesick. And whenever he does, he tries to talk to his family or work on his craft to take his mind off it. He hasn't visited Haiti since the summer of 2018, but the plan is to have his mother come to Louisville for his graduation, and on occasion to see him play in Kansas.

When the basketball program at Life Prep Academy was shut down, he moved to Sunrise Christian Academy, a national powerhouse program in Bel Aire, Kansas, a suburb of Wichita. But he had a hunger to challenge himself even more and to find a better personal fit. That’s when Kipness spotted Muscadin at the AAU Adidas Gauntlet Tournament in Birmingham, Alabama, last summer.

“He played hard, and that’s something that stands out in an AAU game,” Kipness said. “Guys just don’t play hard every single possession.”

He was impressed by Muscadin's motor, elite ability to rebound and stretch the floor and his outside shooting.

College coaches attending the tournament mentioned to Kipness that Muscadin was looking to transfer out of Sunrise Christian, so Kipness “took a leap of faith” and reached out to him. He laid out plans he had for Muscadin to be an NCAA full qualifier: take some online courses, extra classes in the fall and ACT prep. The talent on the court was evident. Kipness wanted to make sure that Muscadin could bring those basketball skills to the next level.

“It wasn’t that his grades weren’t up to the standard,” he said. “It was just making sure he needed 10 core credits coming into his seventh semester and 16 credits in total. He was just lacking some courses he needed to take and catch up. We worked with JCPS and made sure that he’s taking the courses that are going to show up on Holy Cross’ transcript.”

Kipness served as the student manager of the Louisville basketball team under Rick Pitino from 2011-14 and later resided in Senegal, where he worked as the director of player development intern with Sports for Education and Economic Development Project. Traveling across the United States and working at basketball camps with coaches such as Tom Izzo and Billy Donovan, he grew his passion for developing and maximizing young athletes’ talent.

Four years after Aspire Academy was founded, Muscadin caught Kipness’ attention, and the coach wanted to help him reach his full potential. Aspire, a nonprofit organization, is able to provide scholarships to kids who are deserving not just for their basketball talent but also on the basis of their interviews, leadership qualities and grades.

“Gethro was somebody who fit all the prerequisites of receiving a scholarship,” Kipness said.

With Muscadin also looking for a better opportunity, the two kept in touch and hit it off. Muscadin moved to Louisville last summer. The adjustment this time wasn't as difficult or drastic as when he moved from Haiti.

“Everything is different. I feel like here in Louisville, there’s better activities to do,” he said. “The city is way bigger, too. Wichita is very windy, and it gets super cold.” 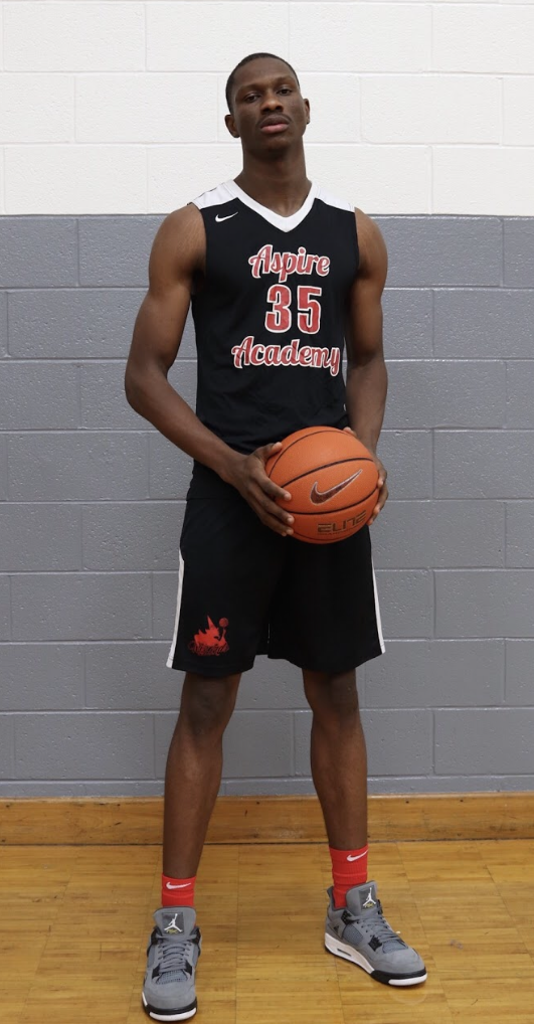 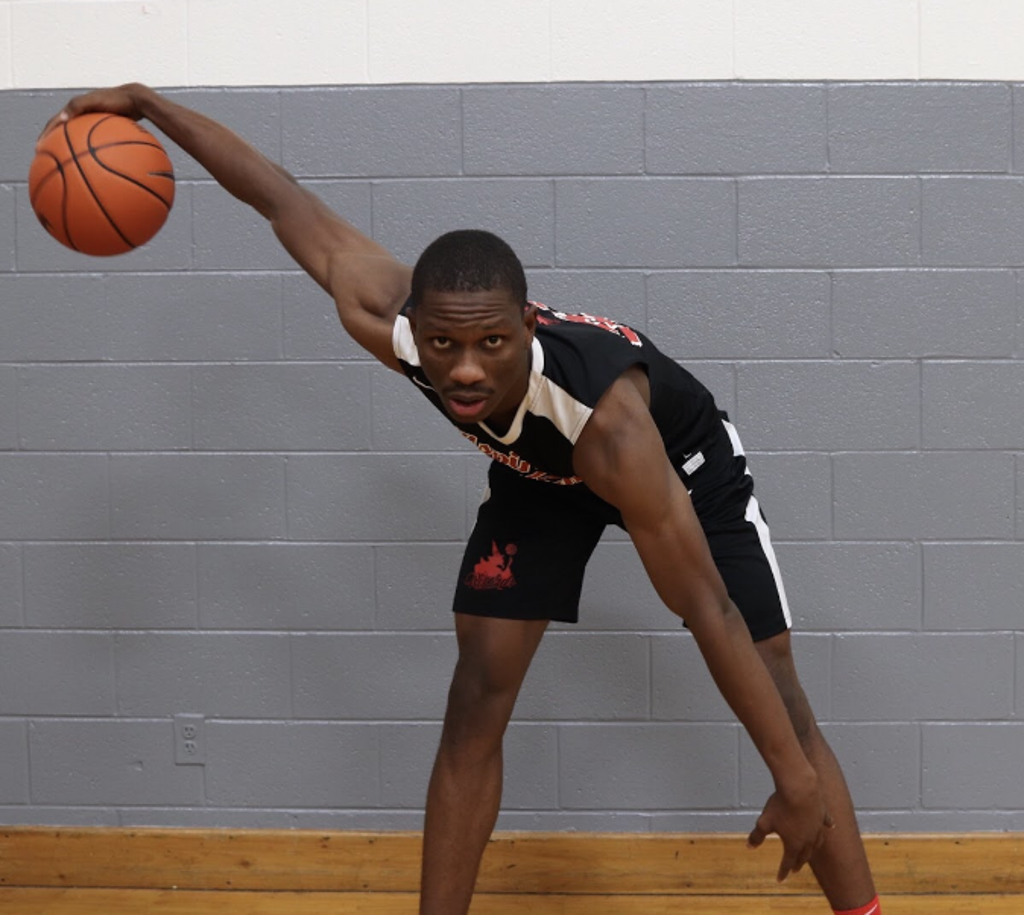 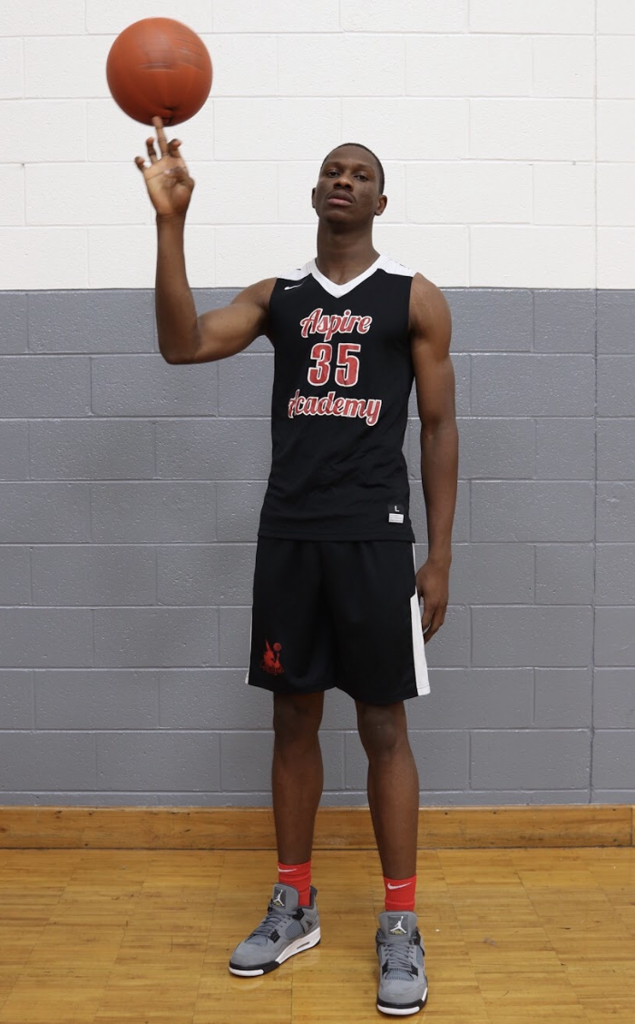 The competition level also met his expectations. Every game was competitive as Aspire played against some of the top teams in the country. Despite suffering a stress fracture in his right foot and missing two months of action, Muscadin thrived when he was healthy.

"He trusted the process," said Vonzell Thomas, Muscadin's YGC36 AAU head coach. "He took full advantage when he got his turn. He's probably our best rebounder in the program, and I've had a lot of big time guys. One thing you can't teach a big man is how to run the floor and he runs the floor well, too."

Aspire's most prominent alum is Charles Bassey, the 6-foot-11 center from Western Kentucky who bypassed the NBA for another college season but is out for the year with a knee injury. Kipness said Muscadin is a different player from Bassey, who graduated from the program two years ago, but both are "some of the best that's repped an Aspire jersey."

“Charles was more physically imposing with his back to the basket,” Kipness said. “Gethro is more of a pick-and-pop guy, who’s really able to space the floor.

Kansas assistant coach Kurtis Townsend, who recruited Muscadin for two years, said once he gets stronger and develops moves in the paint like jump hooks with both hands, he could be even more dominating.

“His upside is great. He can really rebound the ball well and shoots the ball well for his size," he said. "The people that ended up recruiting him like Texas Tech, Minnesota, Kansas State where he took visits, I thought they all saw the same thing that we saw."

When Kipness first saw Muscadin in early July, he only had three Division I offers. A few weeks later when he attended the NCAA youth basketball camp in Houston, “he blew up” with offers flooding in from Power Five schools. Muscadin’s talent and potential attracted Chris Mack (Louisville), Bill Self (Kansas), Penny Hardaway (Memphis) and Bruce Weber (Kansas State) to come to Holy Cross and watch him in action.

“He’s a great player. You got a 7-footer 30 feet from the bucket,” Wesley Christian coach Randy Casey said after his Allen, Kentucky, team played against Aspire in February. “We didn’t know he could shoot it that consistently. Good players make good plays.”

Muscadin eventually signed his national letter of intent to play at Kansas in November, following the footsteps of 16 Aspire graduates who have gone one to play in Division I schools since the first graduating class in 2017. His final list included Kansas, Louisville, Kansas State, Minnesota, Memphis and Texas Tech.

“(Self and I) have a great relationship. He kept it honest with me,” Muscadin said. “He didn’t lie to me and didn’t promise my anything like playing time. He let me know that if I go up there and work hard, they will give me an opportunity. Big 12 is a great conference and has great competition. They have many athletic guys. It was a great fit for me.”

Muscadin said he wants to model his game after former Kentucky great Anthony Davis and make it to the NBA. His goal is to bring his family to the United States and “all live together like back in the old days.”

But despite his lofty goals and taking the next step by playing for what is currently the third-ranked team in the nation next year, Muscadin's name draws more questions than amazement to those in Louisville. But he likes it that way.

At least for now.

“I’ve been underrated for my whole life. I can’t do anything about it. It’s always been like that,” Muscadin said. “I’ve been a nobody guy. It actually makes me work harder. Whenever I work on that stage two, three years from now, I bet people would know me. They would try to know who I am, where I went to school, and they’ll know I went to school right here in Louisville.”