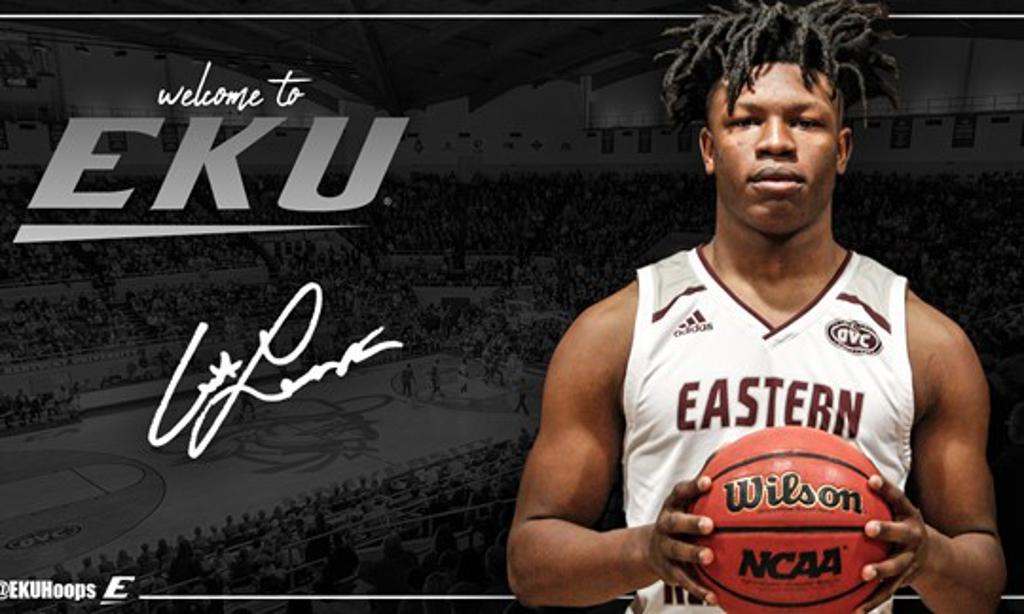 Curt Lewis’ lifelong goal was possible. It was also still out of reach, for reasons that had little to do with his basketball ability.

After seeing what Lewis could do, Louisville coach Chris Mack once told local coach Tim Barnett that he was impressed. Mack would consider recruiting Lewis if his academics were in order.

"Everybody was saying that it was impossible and there’s no way that he would qualify,” Barnett said.

Looking back a year later from his new home at Eastern Kentucky University, Lewis is now able to say he did what so many said he could not.

Perhaps the turning point came when Barnett showed Lewis flattering messages about him from Mack after Lewis found his way onto Barnett's post-graduate team at Louisville's Aspire Academy.

But really, Lewis said, the lightbulb moment was in early November. His mom was hospitalized after a serious car crash. It was time for him to get focused academically.

“I feel like I turned into a new person,” Lewis said.

An NCAA truth often obscured by its uplifting commercials is that big-time college athletics isn’t for everyone, no matter how talented a teenager might be.

For all the top basketball prospects heading each year to Division I programs and hopefully eventually the NBA, there are others long on talent but short on academic discipline, falling behind in high school and hopelessly unable to meet NCAA entrance standards.

“Whatever happened to” stories exist all over the place, including here — as in, you had New Albany’s Romeo Langford at Indiana and Trinity’s David Johnson at Louisville, but whatever happened to that guard from Valley High School who was so good?

A Kentucky Mr. Basketball finalist and Sixth Region Player of the Year who averaged 25 points per game as a senior in 2017-18, Lewis admitted he felt overlooked at the time. He heard only from junior colleges. At one point, he even committed to one of them, Tallahassee (Florida) Community College.

“It was tough,” Lewis said, “because I fell behind and then everybody was telling me I had to go JUCO. I was just like, ‘I really don’t know what to do,’ because I was getting the wrong information. I didn’t know what my next move was.”

For its second school year in the city, Aspire moved to Holy Cross High School and added a post-graduate team to be coached by Barnett. A Louisville native who played at Waggener High School before ending up as a Division I player at Nevada after a season at EKU, Barnett later returned to coach at Ballard High School where he founded and operates the FOCUS Basketball Academy.

Barnett, who grew up in the Victory Park area of Louisville’s West End, said he saw a bit of his own background in Lewis. And the coach’s hometown ties proved significant in convincing Lewis to stay in Louisville for a post-graduate season rather than head to junior college. Barnett had attended middle school with Lewis’ father, which allowed him to set up a meeting with the family.

“For me, it was personal,” Barnett said, “because so many people said that it was impossible (for him to qualify). So many people were trying to discredit what it was we were saying to him. I just thank Curt and his parents and his family for even believing in us and giving us the opportunity, because it hadn’t been done before around here. He had to really take the leap of faith.”

In choosing Aspire, Lewis gambled on himself, putting off junior college in the hopes of being able to qualify academically without going that route. If he couldn’t do it, he’d have to basically start over in junior college anyway, only it would be a year later.

“I wasn’t necessarily sold on Aspire at the beginning,” said Gary McCawley, an academic adviser for Lewis at Valley, “just because you hear a lot of things about prep schools and things of that nature and just because I knew it was going to be such an uphill battle.”

The junior college programs knew that, too, and they continued to call Barnett in the hopes of adding Lewis down the road.

Barnett kept responding that, no, Lewis was going to qualify to play Division I.

With Barnett, there were conditions right off the bat. Every day would be structured at Aspire. Even though Lewis was attending prep school in his home city, he would live on Holy Cross’ campus with the rest of his new teammates. And he wouldn’t be free to go home on weekends, thus minimizing distractions.

While some of Aspire’s other post-graduate players were taking classes at Spalding University, Lewis instead was faced with courses through James Madison, an online high school based in Georgia.

Meanwhile, Barnett brought in McCawley as a familiar face to continue to work with Lewis academically.

There was something else, too.

Lewis, as it turned out, had been diagnosed in elementary school with attention deficit hyperactivity disorder, or ADHD. He hadn’t taken medication or even really acknowledged it for years, but that learning disability — and the fact Lewis had been given a documented Individualized Education Program, or IEP — meant that Lewis could retake classes and replace them for the purposes of NCAA qualification standards. 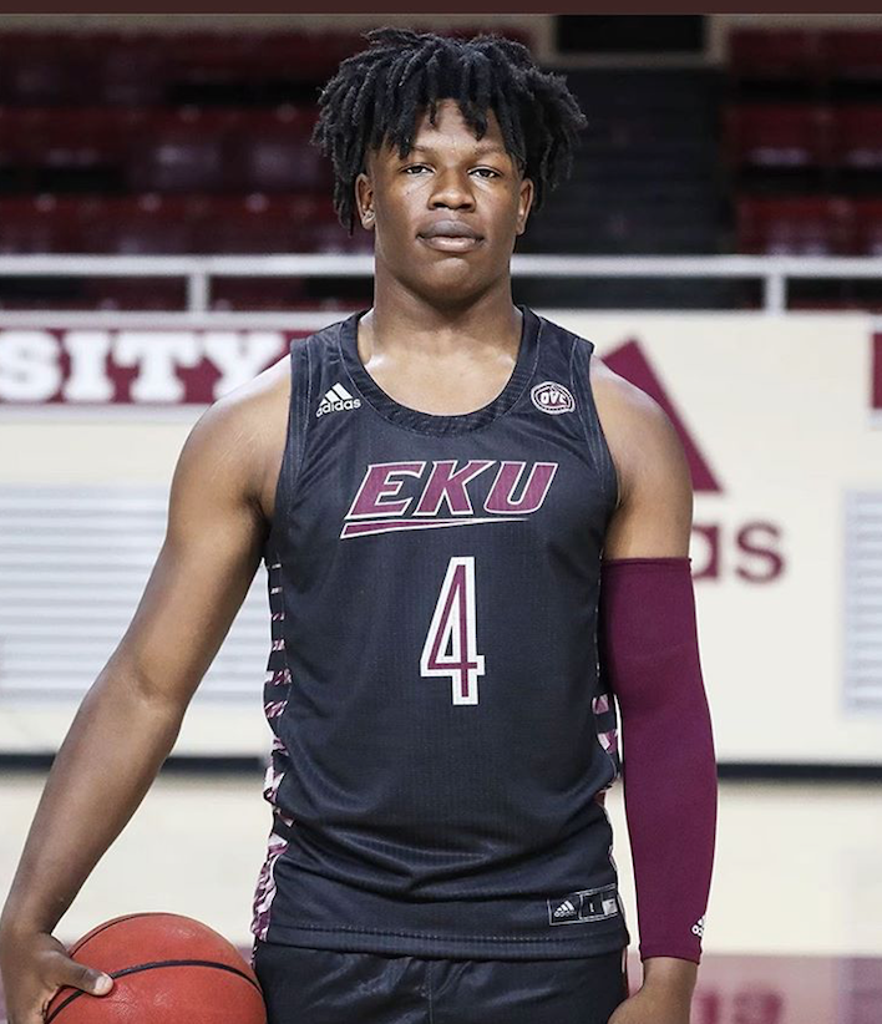 “It was something that had always been there,” McCawley said, “and that was a part of the reason for the struggles in the classes. I guess it was more the stigma of having something like that or having a label — you know how sometimes they put labels on kids — so he never really got some of the stuff he could have gotten in school to help him just because he wanted to do it on his own.”

“We had to go actually find it and look for (the IEP),” Barnett said. “We had to go to Seven Counties (Services). We had to do some research and find it and make sure we could actually find the IEP, because it wasn’t still active because he didn’t use it at Valley High School. … (Upon finding it) the lady says, ‘I don’t know why we still have this file because he hadn’t been diagnosed since fifth grade and usually after five years we destroy the files.’ It was just by the grace of God that the file was still there.”

In addition to the classwork, Lewis focused on ACT prep to raise his score. It was discouraging when he went from a 14 to a 15 in the fall.

Then came November and his mother’s car accident.

“That was crazy,” Lewis said. “She’s doing a lot better now. She’s walking and moving around. She’s starting back to work now. She’s driving. God is good for that.”

Lewis retook the ACT in December and scored a 21. That was enough, and it was smooth from there with finishing up classes.

Barnett and McCawley each confirmed that Lewis has since been cleared academically by the NCAA. When it began to look as though that would happen, Division I programs perked up.

"You've got to give the kid a lot of credit," EKU coach A.W. Hamilton said, "because a lot of kids when they don't make it out of high school to qualify for the Division I level, they sometimes fall apart or slip through the cracks, but Curt was able to keep fighting and was able to make it. He's a special young man. ...

"When we got him, it was a huge day for us. He's one of the most underrated players I think I've seen out of our state in a long time."

On the court, the 6-foot-5 Lewis continued to shine while playing for Aspire's post-graduate team. EKU’s news release announcing Lewis’ signing in April said he averaged 32 points and 17 rebounds per game this past season with Aspire. Barnett put those totals higher: 37 and 21.

One of the reasons Lewis said he opted for the Colonels was the fact it was close enough for family to watch him play. Plus, his aunt had attended the school.

Lewis also noted that two Ohio Valley Conference players had been selected in the first round of the NBA draft this year: Ja Morant from Murray State and Dylan Windler from Belmont.

“I feel like if I come in and do what I’ve got to do on and off the court that could be me one day,” Lewis said.

"He's got a chance to be a big point guard one day," Hamilton said. "He has great court vision, and one of the things I saw this past year at Aspire was how much he improved handling the basketball. He's a pass-first type of player, but he can score it. He's got great athleticism, and he's got a great physical, college-ready body right now. He's a really special talent."

Lewis said his source of motivation has been his family. He mentions a phrase he uses, “Get out the city,” meaning that “Every day I wake up, I’ll be like ‘I’ve got to get my family out of Louisville, because there’s a lot of bad stuff going on,’” he said.

“Me and my family have been through a lot,” he said. “We’ve been living in the projects. It’s just been a lot. And to say that I’m a Division I basketball player, I’m in college and doing everything good, all I can do is thank God about it. It’s just crazy, but I’m very excited for this upcoming season.”